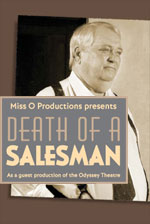 If you’ve missed Eddie Jones‘ previous performances in Death of a Salesman, you’ve got another chance to see him shine in this role.  Eddie has sent the following note, as well as a great review, that I’m passing on to all of you.

Hello All,
I have been given the privilege of playing Willy again. I think I am getting pretty close to getting it right. Check our production out. Please.

Arthur Miller’s Death of a Salesman enjoys iconic status in the American theatrical canon and justly so. However, in an odd way, its success has worked against it.  Revivals tend to attract mega-stars to the role of Willie Loman and the productions built around them tend to strive for operatic grandeur. The result is often less than successful, as perfectly illustrated by recent productions starring Dustin Hoffman and Brian Dennehy. The Willies we get in these bloated, star-driven vehicles are intriguingly idiosyncratic (Hoffman) or downright bathetic (Dennehy), but the play inevitably suffers.

Now Los Angeles’ estimable Odyssey Theatre is presenting a human-scale reading of the play that allows it to speak with the quiet power that I think Miller intended.

The Odyssey production, under the unobtrusive direction of Bob Collins, allows veteran character actor Eddie Jones to turn in a masterful performance that is quite literally heart-wrenching. I have never seen Miller’s merciless deconstruction of the American myth of success rendered more powerfully or more simply. I confess that I am unfamiliar with Jones’ work, but if this isn’t the greatest performance of his career then I feel cheated from having missed him in earlier roles.

Linda Loman, Willie’s long-suffering wife, is often portrayed as a beaten-down woman in performances that are muted to avoid drawing attention from the star. Anne Gee Byrd is something a revelation, giving us a Linda Loman who lives up to Biff’s description of her as a “woman with substance.” She is quite simply superb, every inch Jones’ equal and, through her love and loyalty, we are able to see the Willie that was in the sad, beaten man who is.

Ivan Baccarat (Biff) and Aaron McPherson (Happy) as the Loman’s flawed sons do a good job of making concrete the fatal flaws in the world view Willie wants so desperately to pass on to them. Baccarat works especially well with Jones. The scene late in the play in which Biff sees Willie at his most-human and most-pathetic is embarrassing to watch, which is just as it should be.

Miller, unlike most other playwrights, has the gift of creating small roles that allow good actors to score indelible impressions with a few scant moments of stage time. The supporting performers in this production seize the opportunity. Robert Machray (Uncle Ben), Alan Charof (Charley), Jeremy Shouldis (Bernard), and Lou Volpe (Stanley, the waiter) are all excellent. And Jill Jacobson (The Woman) makes Willie’s cruel betrayal of Linda perfectly understandable.

This is, quite simply, a superb production of a great American classic. If you are in the L.A. area, don’t miss it.

Salesman runs from January 20th through February 25th. Tickets are $22 to $26, with discounts for students and union actors. For more information call 310-477-2055 or log on to www.odysseytheatre.com.