The I-Maniacs Fan Club has some really cool items for bid on eBay right now.  Included are a couple of authentic clothing items that were given to crew members of The Invisible Man TV show.  The auctions end June 3, 2007, so get your bids in if these items interest you!

View and Bid on I-Man Collectables on eBay

If you’re itching to come to the I-ManiCon this summer, you’ll be interested in knowing that the official website is now up.  I can’t take credit for doing it this year as I had to bow out due to time constraints.  This film project keeps me busy!  But, thanks go to Deb, the I-Maniacs Fan Club webmaster, for taking over the job.

This year you can find the con website at the I-Maniacs Fan Club website.  The direct link is http://imaniacs.org/cons_events/imanicon2007/index.htm.

Last year, Vincent Ventresca, Paul Ben-Victor, Eddie Jones, and Mike McCafferty were able to attend.  It was such a treat to have them there!  This year, Joyce, the fan club president, tells us that all four guys are available to come again.  Of course, that could change if they have to work, but I’m hoping that all four will be able to make it again this year.  No word on whether Shannon Kenny can come yet, but I’m hopeful.  It would be so cool to have the entire cast at the con this year.

The registration form is up at the site and the cost of attendance is $40 for the one-day con.  Just print out and fill in the form and send it in with your money.  The admission price does not include meals.  Those are optional.  But I highly recommend that you attend the dinner also because you’ll get to dine with the cast.  We always take them out to dinner as a token of our appreciation for taking time out of their busy schedules to visit with us.

If you’re sitting on the fence wondering if you should go or not, I can assure you that you’ll find the experience worth your while.  It’s a great bunch of fans getting together with a great cast.

Time is running out.  There are less than nine weeks to the con, which will take place on July 21, 2007.  So get your registration in ASAP!

Hope to see you there! 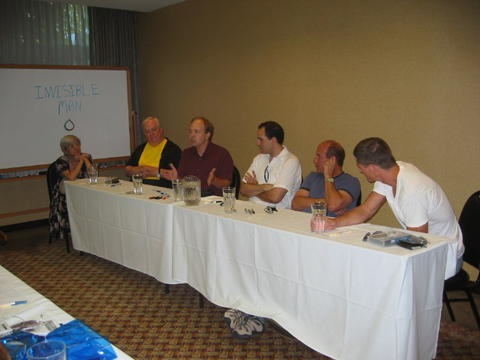 If you’re looking for some new I-Man icons to jazz up your profile on bboards and such, here are 60 to choose from.  Thanks go to Kansas, the creator of these very cool icons.

Sadly, L33t Haxxors 4 did not win the final contest on Acceptable TV because, well, we got hacked.

The winner, a good friend of mine who is also the creator of the wildly popular “Chad Vader” series, posted on his site that his show was up for voting. Ambitious readers, noting that voting was unlimited, took that to heart and set up autoclicking programs to rig the game. We tried to fight it with our own ballot stuffing but in the last hours of voting, we lost by 2%. Ugh.

I mention L33t here because as writer and co-director of the past 3 episodes I’ve definitely started to mold the duo of Overlord and Razorwire to resemble Fawkes and Hobbes, respectively. I think they’re really starting to hit their stride and hopefully we’ll shoot a few more of these. Take another look and see if you can spot the similarities.

Also, check out the last three episodes of Mr. Sprinkles. I did the voice of Agent Pedone, who works for Homeland Security. I was surprised that the animation looked a lot like Eberts! I hadn’t even thought about that until I saw the first episode and then it hit me that this could be Eberts, post 9/11. Admittedly, a harsher, no nonsense version, but hey, it’s been quite a few years since we’ve seen him so who knows?

As far as the I-Man, well, you know the story thus far. I’d love to get the cast together for a little I-man short in the vein of the Star Trek online series that use Trek talent. It’d be a non-profit fan film, maybe something to jump start the whole process of a feature. I dunno, if you all support this, maybe you should post comments and let me know.

Having said that, I support Amanda’s quest to bring us all back to the big screen some how. She’s tireless and fearless, both of which are crucial in the battle against Hollywood. I know she’ll succeed someday, when is the million dollar question.

Back in December I blogged about the upcoming reality show On The Lot.  Now after months of waiting, it’s hard to believe the show begins airing next week on Fox.

Out of 12,000 videos that were submitted to the show, only 50 made it to the semi-finals.  Wow.  Talk about tough competition.  So today, as I was scanning the list of semi-finalists’ names for the first time, I was thrilled to see that one name in particular had made it through:  Karla Jean Davis.

Karla is a very talented 25-year old tape operator from Altanta, Georgia.  I’ve only had time to watch a very small portion of all those submissions and, fortunately, Karla’s was one of them.  I was immediately impressed with her talent and right away added her film to my favorites list.  Well, it looks like Steven Spielberg has taken note of her talent also and has chosen her for the top 50.  I’m tickled pink for her!  I should mention that Karla is also a blog mailing list subscriber, so if I seem a bit biased, I admit it.  I totally am.  Way to go, Karla!  Congratulations on making it into the semi-finals.  I’ll be rooting for you!

Be sure to check out Karla’s film submission.

50 On the Lot Semi-Finalists Announced

The fourth episode of “L33t Haxxors” is now up at Acceptable TV and your vote is needed to help get it aired on VH1 this Friday.  Mike McCafferty and Jason Makiaris both make an appearance in this one.  Go check it out and vote!

Last weekend I drove into San Francisco to attend a casting seminar taught by casting director Kim Hardin.  Kim has 20 years of experience as a casting director and is known for films such as 2 Fast 2 Furious, Four Brothers, and the award-winning Indie film Hustle & Flow.

The class was geared toward actors, but directors and producers were also invited to attend.  It didn’t surprise me that we were greatly outnumbered by the actors.

Even though it is still very early in the development process and we don’t know what, if any, other roles we’ll be needing to fill, this was a great opportunity to learn a little about the casting process ahead of time from someone who has been doing it for a long time.  It also gave me a great excuse to go into the city on a beautiful day.  I was delighted to find out that the hotel where the seminar was held was next to the cable car route.

The fun part of the class was the “cold read” (auditions performed without memorizing the script) audition practice at the end.  Kim gave all the actors “sides” (a portion of a script to be read at an audition) and sent them out into the hotel hallway to practice for a bit.  Some actors were teamed with another actor, and some were sent out by themselves because they would be doing their scene with Kim herself.

After a short practice period, Kim called everyone back into the room.  It was fascinating to watch their performances.  Some were obvious beginners, while others had much more experience under their belt.  Nerves got to some of them and the sometimes long periods of silence betrayed the fact that they forgot their lines.  In an effort to be understated, some gave performances that could best be described as bland, while others went too far the other way with their over-the-top performances.

As I-Man fans, we often brag about the incredible chemistry of our cast so, of course, I closely watched the actors who were paired up in teams.  One couple really caught my attention.  They came across as though they had known each other for years.  The chemistry was there and it was very obvious.  Others just weren’t clicking.

During the instruction part of the class there was one young man, looked to be in his teens, that kept asking questions about things that Kim had already covered just minutes before.  It was apparent that he wasn’t paying attention, but Kim was very patient and answered all his questions.  I was curious how he would do.  When his turn came, he read opposite Kim.  And when I say read, I mean, literally, read.  He didn’t act the part at all, he just read it.  I’ve got to give him kudos for having the courage to do the practice audition.  He must have been incredibly nervous.  He has a marketable look, but he definitely needs training.

An older gentleman, who used to do a lot of theatre work and was just getting back into acting after a long stretch off, absolutely nailed the part of a pastor.  He was quite convincing.

Kim gave some of the same sides to more than one actor in order to give us the opportunity to see how different actors interpret the same scenes differently.  It was fascinating to watch each actor bringing something different to their roles.

After attending this class, I have to say that I have a renewed respect for actors and what they do for a living.  The majority of us only do a small number of job interviews in our lifetime before settling into our respective jobs for at least several years.  But can you imagine spending most of your career going to job interviews (which is basically what an audition is) all the time?  Well, the majority of actors do exactly that.  Getting an acting job takes a special kind of fortitude that, dare I say, the majority of earthlings wouldn’t want to deal with.

I tip my hat to actors everywhere who are chasing and living their dreams.

Well, it took them four months, but The Invisible Man bboard is back on SciFi.com!  If you’re a new reader and don’t know what the heck I’m talking about, please refer to my January 28, 2007 post entitled Urgent: The Sci Fi Invisible Man Forum Needs Your Vote!

You’ll be happy to know that I-Man had the most votes and beat out all the other shows in the poll.  Way to go I-Man fans!  Now I’m hoping (hint, hint) that there will be lots of support for the I-Man bboard so that we don’t run the risk of losing it again like we did before because of disuse.

What’s really cool is that the administrators are asking the fans of each show to create the introductory message for their show’s forum.  Here’s a message explaining about that from Admin1 from the Sci Fi forum:

Welcome to our new forums for some long-time favorite shows. We invite you to work together to create a 30-word-max message that introduces your show and invites forum members to participate. For example, Doctor Who’s message is “Fancy a trip in a TARDIS? With ten Doctors and countless Companions to choose from, you’ll have plenty to talk about here in the official Doctor Who discussion forum.”

You might want to use this thread as your working area, then, when you’re reading, PM your proposals to admin and admin1!

If you’re interested in helping to create the introductory message for the I-Man forum, I hope you’ll go to the “SCI FI Favorites” thread and we can brainstorm together!