If you haven’t heard about this yet, don’t get too excited.  This is not our Invisible Man.  Instead, this will be a sequel to H.G. Wells’ original story that focuses on the British nephew of the original Invisible Man.  The story is to be set during World War II.  David Goyer will write and direct the film.

Well, I don’t think I need to tell you that I think Universal totally missed the boat on this one.  They own the rights to our Invisible Man and yet they choose to ignore it and make a film that is a sequel of the original.  What a shame.

Cinematical:  David Goyer Will Write and Direct ‘The Invisible Man’

I said that I’d play catch up on the news when I got back from the con, so here’s an item that is about three weeks overdue.  Yikes!

1408,a horror film written by Matt Greenberg, as well as Scott Alexander and Larry Karaszewski, has been out at theatres for a few weeks now.  I believe it’s still playing in some theatres.  So if you want to see this film, there may still be time, but do check your local listings to be sure.

A picture of Matt Greenberg attending the world premiere of 1408 can be found here.

In related news, the following article, partially quoted from the Los Angeles Times, gives a interesting tale about the writing and rewriting process for this film as well as some insight about screenwriting protocol in Hollywood.

It was somewhere around the time that he was in his backyard grilling ribs for Scott Alexander and Larry Karaszewski (“Man on the Moon”) and their families that Matt Greenberg (“Reign of Fire”) realized he had a unique screenwriting circumstance on his hands. Given that Alexander and Karaszewski had replaced him as the writers of the horror film “1408,” a friendly barbecue would have seemed unlikely.

As with most screenwriters, all three had been hired for development rewrites before and been rewritten themselves, but none could remember ever becoming so friendly with their ostensible collaborator — at least not during the active rewrite process. But here they were communing over Stephen King and some baby backs.

It’s actually supposed to be part of the screenwriters code — tacitly encouraged by the Writers Guild — that when a writer is hired to rewrite someone’s screenplay, he should throw a courtesy call to the previous writer (that is, when it’s not a pile-on with 22 writers, like “Mr. & Mrs. Smith” or “Stuart Little,” in which case most of the involved parties would be happy that you forgot to call them).

Greenberg worked on the screenplay, an adaptation of a 20-page King short story about a man terrorized in a spooky hotel room, for a year at Dimension. But after the project lay quiet for a while, the producers told him they were bringing on Alexander and Karaszewski.

The writers dutifully called Greenberg to get his blessing, and although both parties admit to a natural tension, Greenberg, who counts Alexander and Karaszewski’s “Ed Wood” as one of his favorite movies, ultimately felt reassured by their ideas and subsequent drafts. (It also made a difference that this was not an original screenplay.)

“These guys really were doing the heavy lifting during production,” says Greenberg, who met with them fairly regularly. “I tried to keep my own ego in check and just recognize that, ‘Look, at this point I’m an informal consultant.’ ” They all eventually agreed over a handshake to a shared screenplay credit, which allowed them to bypass a dreaded guild arbitration hearing. In this rare case, their civility won out over a system designed to provoke competition.

Okay, more about the writing of 1408.  What can I say?  I find the whole screenwriting process absolutely fascinating.  So here’s a podcast by Senior Editor Jeff Goldsmith of Creative Screenwriting Magazine.  In it he interviews co-writer Matt Greenberg and the co-writing team of Scott Alexander and Larry Karaszewski.  Warning:  This podcast is almost an hour long and it contains spoilers for the movie.

So it’s been two days since I’ve been back home and I’m just starting to get myself back into a rhythm again.  The pace I’ve been going lately has been fun but exhausting.  Not only is it nice to slow down a bit and recover my energy, but I’ve pretty much been forced to do so since I brought home a rather unexpected souvenir from my trip — a sprained foot.

I gotta tell you, driving from LA to the Bay Area with a sprained foot is not my idea of a fun time.  But I’m grateful that it was my left foot, otherwise, I don’t know how I would have been able to drive home.  The foot is healing nicely and, while still very swollen, I can actually walk around now without too much of a limp.

Okay, enough about my foot.  Let’s talk about the con.  So you’re probably wondering which cast members appeared this year.  Well, the answer is none.

This is the first I-ManiCon ever where this has happened.  We all know that there are no guarantees.  Things happen and this year they happened to everybody at the same time.  Vince had a family reunion, Mike was out of town for a wedding, Eddie was in rehearsals for a play, Paul was doing who knows what, and I don’t have a clue about Shannon.

It pays to be flexible when going to an I-ManiCon.  It also pays to stay in town a few extra days.  Mike flew into town Sunday evening and stopped by the hotel where we were staying for a short visit.  He was an absolute sweetheart to do so because he was exhausted from his trip and he still had an hour’s drive home that night.  By the way, Mike and Sarah are having another boy and he’s due in November.

Paul was able to meet us at a restaurant in Santa Monica on Monday night.  He brought a couple of friends with him and we had a great time.

The con itself was a fun reunion of old friends and a meeting of new ones.  We did the typical con activities such as play games, watch I-Man videos, go out to eat…and this year we also had a poetry/song reading.

I’m afraid I failed miserably in the picture-taking department.  I was all set to take pictures of the cast at the con, but they didn’t show up and I forgot to take my camera with me when we met with Mike and Paul.  So once again I am dependent on others for pictures, which I hope to have in a week or two to show you.

Overall, it was a great time.  Staying in LA a couple of extra days gave us time to do some sightseeing and gave us the flexibility to meet with Mike and Paul.

I’m looking forward to next year and hoping that all the cast can attend and more fans can join us in the fun!

Dear readers, I apologize for the lack of posts lately, but I promise I’ll get back on track and caught up on the news when I get back.  But now I’m off to Los Angeles for I-ManiCon 2007 to visit with cast and fans!

Feel free to leave comments, but know that I won’t be able to approve them until I get back next week.  I wish I didn’t have to moderate the comments, but if I didn’t, spammers would have free reign to post their crap here and I won’t allow that.

Talk to all of you next week! 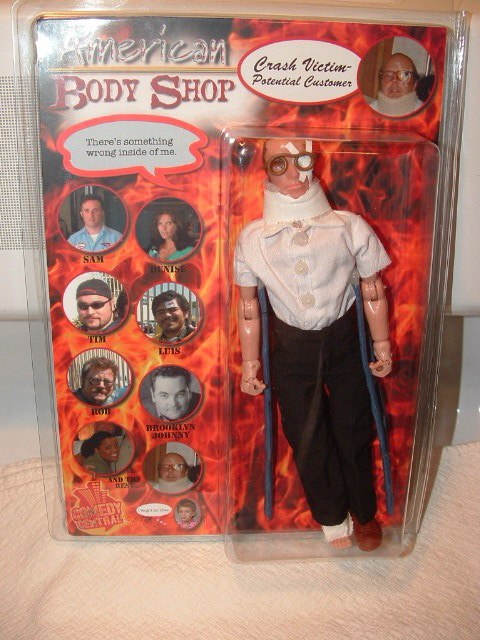