Paul Ben-Victor and Frances Fisher talk about their play, Sexy Laundry, in the following video interview.  Sexy Laundry is now playing at the Hayworth Theater in Los Angeles through March 16, 2008.

I embedded the video into this blog post, but could only get it to work intermittingly.  If it doesn’t work for you, click on the link below to go directly to the video on YouTube. If you’re a fan of Babylon 5, you’ll enjoy this podcast interview with Mike McCafferty.  Mike spends an hour talking Babylon 5 with the same group that interviewed him recently on the Slice of SciFi Show.

…Oh, and I’m in the camp that thinks that the show got better when Sheridan replaced Sinclair.

I think a lot of you I-Man fans have probably already seen this, but if not, here’s a peak at the menus from the upcoming Invisible Man Season One DVDs. 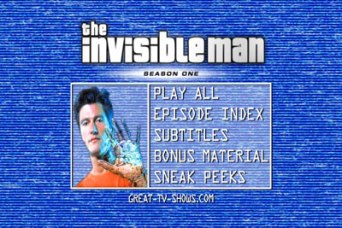 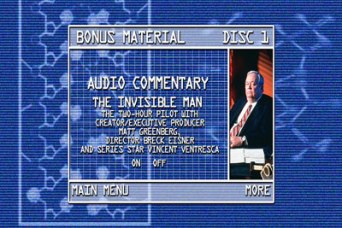 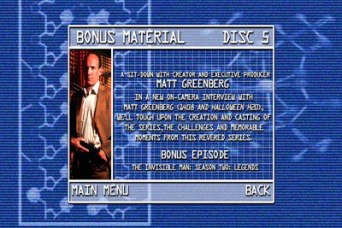 Pretty cool, eh?  I can’t believe the DVD release is only a month away!  I can’t wait!

If you haven’t pre-ordered your DVDs yet, I urge you to please do so.  Remember, if we are ever to hope to get season two on DVD, we really need to support the season one DVD release.

You can pre-order the DVDs directly from the NBC/Universal store for $44.98.  And, now, you can also pre-order them from Amazon.com for $43.99 (a dollar savings).

While you’re at Amazon.com, please be sure to leave a customer review for the DVDs.  As of this posting 11 fans have left really great positive reviews, but we need more.  Many more.  After you’ve done that, please also head over to IMDb and leave a comment about The Invisible Man on that site too, if you haven’t done so already.  Why is this important?  Because I point industry people to those sites and they do read those comments.  So please take a few minutes and share what you love about I-Man.  Thank you.

Last Saturday, I ventured across the Bay Bridge again to attend a film financing workshop featuring IFP (Independent Feature Project) founder Sandra Schulberg.  Sandra has a very impressive resume that her IMDb profile barely touches upon and that includes expertise in international financing and co-production.  Getting to spend an entire day listening to her was an incredible learning experience.  Some of what she covered I’ve heard before, but I always count a class or workshop worthwhile if I come out of it having learned something new.  By those standards, this workshop was an unmitigated success.  I almost never put my pen down the entire day.  It was eight hours jammed packed with information…too much to try to summarize in one post, so I’ll just hit on some highlights.

Do you think that grant money is only available for documentaries?  Think again.  If your feature film contains subject matter that is relevant to a cause or issue (e.g., the environment, social issues, etc.) that a grantor is interested in supporting, your project may be able to get funding from grants.

Depending on your budget, grants may not cover all the costs of producing your film, but here’s a little known fact:  You can mix PPM (Private Placement Memorandum) money and grant money.  Sandra called projects that mix funding from these two sources hybrids.  Of course, the paperwork gets more complicated when you go this route, but it is quite doable.

Some grants are more like a loan.  They are called Program Related Investments (PRI).  This is a grant that the grantor wants back.  Some may charge interest.

Whew!  Got all that?  As you can imagine, a lot of work goes into creating a PPM; and the SEC (Securities and Exchange Commission) has very strict rules about how PPMs are distributed.

Looking for money for your film project?  Consider going international.  There is money out there, especially in Europe where many governments subsidize film productions.  Interestingly, the U.S. is one of the few governments that doesn’t subsidize films.  Go figure.  Though you can find tax incentives in various parts of the U.S.

But if you’re willing to give up some parts of your copyright to get your film made, partnering up with a foreign production company may be a way to go.  Rules may vary, but, most likely, you will be required to do at least some part of the work in that country, such as shooting or post production.  You might even consider teaming up with production companies from several of the countries under the European Co-Production Treaty and taking advantage of the subsidies from each country.

Pre-selling foreign rights is one of the most common ways to raise funds for a feature.  Foreign sales account for more than 50% of a film’s revenue, so by pre-selling your film to foreign distributors, a large portion of your budget can be raised from this market and you’ve also set up distribution in the foreign market.

Hiring a foreign sales agent is great if you can afford it.  At  12% to 40% commission plus costs, they can be quite pricey.  But Sandra recommends selling the foreign rights yourself.  It’s a great experience that she encourages filmmakers to try for themselves.

So how is this done?  By attending international film markets and selling your film to the foreign distributors who attend and are looking for films to buy.  Here’s the list of the film markets she recommends attending in the following order:

When selling your rights to the world (excluding the U.S.), you’ll want to be sure to use the services of a collection agency.  A collection agency, in this sense, is not the type that you would normally think of that hounds you if you’ve fallen behind on your credit payments.  No, these collection agencies function as funnels for all the various countries in which you may have sales agreements.  They collect and distribute the various funds and can provide you with peace of mind in that you don’t have to worry about keeping track of funds from each country.  They charge between 1% and 2% and are well worth the cost.  The two collection agencies are:

Our guest for the next Slice of SciFi Show (#148) will be actor, director, writer and producer Mike McCafferty. Internet geeks will know Mike from his portrayal of the Ghost in the very popular video short “Chad Vader”. He has done stints on television with such great shows like “The Invisible Man, “ER,” “The West Wing,” “The Shield” and more.

However, Mike has also had roles in some pretty big feature films including “National Treasure: Book of Secrets,” “Idiocracy,” to the upcoming Clint Eastwood directed film titled “The Changeling,” due out in November of this year (script written by J. Michael Straczynski).

Addendum by Amanda:  Mike, thank you very much for letting us know about your upcoming interview!  I just want to let readers know that they can catch your podcast interview at http://www.sliceofscifi.com/2008/02/14/mike-mccafferty-on-slice-of-scifi-show-148-sat-feb-16-2008/.  I couldn’t find any mention of when the show starts on the website, but if anyone misses it, they can listen to the interview at their convenience by simply looking for it in the Archives or Most Recent Episodes section of the website. 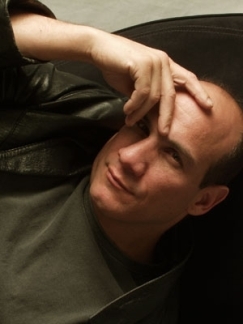 We’ve finally got some news about Paul Ben-Victor’s new series In Plain Sight.  Today, NBC/Universal announced in a press release the date the series will air.  So mark your calendars for Thursday, April 24, 2008, at 10:00 p.m./9:00 p.m. Central on the USA Network.

Paul plays the boss of the main character, Mary Shannon, in this series.  I’m not sure at this point if Paul is a series regular, if it is a recurring role, or something else.

Last week found me making the jaunt across the Bay to San Francisco twice.  Once was for a filmmakers/financing meeting and the other was for a screenwriting class with screenwriter/teacher Lew Hunter.  Lew is a very pleasant elderly gentleman who loves to rattle on about screenwriting.  It’s quite obvious that he loves to teach.

The class was only three hours long and was geared more for absolute beginners.  After taking the semester-long course in script development and story analysis last year, this felt like more of a review to me.  One little tidbit that I did find useful dealt with character development.  Lew suggested writing a half-page description of each of the main characters in our stories in the first person.  He read us a sample characterization and I can see how this could be quite helpful in finding the voice of our characters, as well as fleshing them out.  I’m going to have to give this a try.

The first part of the class was a lecture, then we had a short break.  After the break was a question and answer session.  So everyone was raising their hands to ask their questions and, one by one, Lew answered them.  One of the attendees, who came in quite late, wanted to read a couple of paragraphs of something he had written.  Lew was kind enough to indulge him.  But shortly after he started reading, I wondered if this might be a mistake.  The subject matter was…you guessed it…about his experience neutering a pig.

I would liken listening to this story as akin to driving past an auto accident.  It’s horrible to look at but, somehow, you just can’t seem to take your eyes away from it.  So I sat there listening to how this poor pig is forced onto its back with its legs forced apart and….well, I’ll spare you the gruesome details.

The story seemed to go on and on and on.  What was supposed to be only a couple of paragraphs turned out to be a little over a page long and, thankfully, Lew called him on it.  But the guy was just about to the end, so he was allowed to finish.  So what was his question about what he had written?  He didn’t have one.  He just wanted to read what he had wrote.  By that time I was figuratively pulling out my hair.  I felt cheated.  Some of our valuable time with Lew had been spent listening to a story that had nothing to do with writing screenplays.  What in the class description gave this guy the idea that this was a writing circle?

After the class, I purchased Lew’s book entitled Lew Hunter’s Screenwriting 434 and since I had the author right there, I just couldn’t resist getting my copy autographed.  I’m looking forward to getting started reading it. 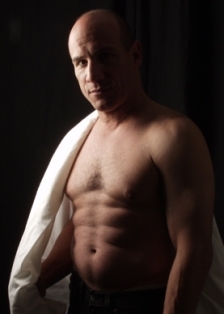 Paul Ben-Victor and Frances Fisher are now starring in Michael Rimi’s production Sexy Laundry at the Hayworth Theatre in Los Angeles.  Sexy Laundry is described as a “saucy, hilarious and extremely touching look at making love in middle age.”  Here’s a peak at the play’s poster.

Sexy Laundry opens February 8 and runs through March 16.  Previews started February 1, but there is still time to catch the last preview tomorrow, February 7.  Performances run from Thursday to Saturday at 8:00 p.m.  A couple of special performances have been added on Saturday, February 9, at 2:00 p.m. and Wednesday, February 13, at 8:00 p.m.