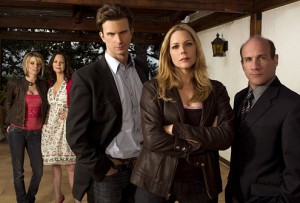 Starting tomorrow, we get to enjoy watching Paul Ben-Victor back in the role of Stan McQueen on In Plain Sight!  Can you believe it’s already the fourth season?

To watch, tune in to the USA Network Sunday, May 1, at 10/9C.  Be sure to check your local listings for the channel and time in your area.

While you’re waiting, check out what Paul has to say about his character and the new season in this interview:

Recently, I had pretty much resigned myself to not getting into the finals of the contest.  The deadline for turning in the releases and other paperwork had come and gone and I had heard nothing from Dockers.  So I went back and read the rules again trying to see if maybe I missed something.  (The rules are written rather loosely and open to interpretation.)  Well, in parentheses there are two words: “if requested” that could be interpreted as meaning that Dockers might choose not to ask for upfront paperwork.  If that was so, I still had a chance.

I’ve been monitoring the conversations on Facebook and Twitter and other semi-finalists have also been wondering if the top five had been notified yet, but there was no answer from Dockers.  The only reply we’ve been getting from Dockers is that they would let everyone know who the top five were on Monday the 25th.

The other day one semi-finalist asked on Twitter if “the top 5 already know they are in the top 5?”  The answer back from Dockers:  “No they do not.”

Whew!  That’s great news!  That means I still have a shot of being in the top five!

In two days we will find out for sure.  If I do make it, please be prepared to vote again because we will only have five days to vote and each person will only be able to vote once per day.  That means only five votes per person!  Yikes!

So please stay tuned for this coming Monday (April 25) for the results.  Let’s hope that Dockers thinks that reuniting the cast of The Invisible Man is as great a project as we think it is!

Wow, it’s been an extremely hectic few weeks since I last updated you about the contest and my submission.  I didn’t mean to let my blogging updates go this long, but it’s been crazy busy.  Fortunately, things are starting to wind down a bit, although I’m still wrapping up loose ends from the shoot.  The cast’s and crew’s jobs may have ended already, but producers are still on the job long after wrap is called.  Yep, no rest for the producer!

I already posted the big news on Facebook and Twitter a few weeks ago, but have been too freakin’ busy to post it here so, if for some reason you haven’t heard the big news yet, here it is:  I am definitely a semi-finalist in the Dockers Wear the Pants contest!

I have all of you to thank for that.  Seriously, I couldn’t have gotten this far without all of you who tirelessly voted for me daily for all those weeks.  You guys totally rock!  And I’m making sure to let the cast know that it was your support that got me into this position.  Fans from not only the US, but, also, the UK, France, Italy, Serbia, the Netherlands, the Ukraine, Russia, Canada, Mexico, Brazil, Australia, etc. all supported the project with their votes.  We are very much an international group!  How cool is that?!

Well, according to the rules, Dockers should pick their top five by around April 6 or so and send them releases and other paperwork to fill out.  Now I haven’t heard anything from them yet, but that doesn’t necessarily mean anything at this point.  They’ve been running a few days late this entire contest, so I’m still holding out hope that I’m one of the top five.  The judges are judging the submissions based on the criteria of originality, creativity, and suitability to represent the Dockers Brand.  Based on what I’ve seen from the other contestants, I definitely have one of the top projects when it comes to originality and creativity.  As far as suitability to represent the Dockers Brand…well, that’s subjective and only the judges really know what they are looking for.

Now if I was a major company like Dockers, I would definitely be looking at projects that have the possibility of worldwide exposure, which this project has.  Movie audiences are worldwide and we already know that millions watched The Invisible Man around the globe.  Tapping into that audience by partnering with a movie could be a smart move for them.

But is a sci-fi movie produced by a fan the kind of image they want?  Hard to say.  The video we shot definitely had more of a fun and humorous tone to it and I love it.  But in the back of my mind I keep thinking, are they looking for something with more of a cool sophisticated vibe?  Is what we shot too geeky?  Yeah, I can drive myself crazy second guessing myself.  But when it comes right down to it, I’m proud of what we shot.  My director, Sandra Myers, and the entire cast and crew all did a fantastic job and poured their hearts into it.  It shows in the quality of their work!  I can’t begin to thank them for their help with this shoot.  Filmmaking is definitely a team sport and I had an awesome team!  I’d be more than happy to work with any of them again in the future.

Whatever happens with this contest, I now know that, if need be, I can pull together a quality shoot on a low budget and a tight timeline.  And I did it on my very first shoot!  That said, I hope I never have to pull a shoot together that quickly.  Seriously.  It’s exhausting.  I was literally getting three or four hours of sleep most nights.  I’m way too old for that kind of physical abuse.  But, if I can produce a small shoot under those circumstances, I know I can definitely handle a bigger project…like a feature film.

I can’t show you the video we shot just yet.  I wish I could, but Dockers requires that submissions be original and not previously published, so I have to wait and see what the outcome of this competition will be before I can share that with you.  At this point, I’ve put too much into the project to risk being disqualified.

I’ve got a lot of blogging to do to catch all of you up on the details of what’s been happening these past few weeks.  We, also, took behind-the-scenes footage and photos that I still need to get and share with all of you.  I mean we’ve got some really cool stuff.  I can’t wait to show you.  So stay tuned!