But the big question is, how are we stacking up against the competition?  Last week I found 33 entries with more votes than we have.  We plowed right past about a dozen or so entries that seemed to have started out pretty strong, but then fizzled out.  And we are getting very close to passing by four more.  But then I found a few more entries that were in front of us.  So as of today, there are 25 entries that I know of with more votes than us.  While it is very encouraging that we appear to be moving up, please keep in mind that I haven’t seen all the entries and have no idea how many that I haven’t seen have more votes than us.  Also, I’ve found at least three entries that started after us and have passed us by.  So we need to keep voting every single day and we need to keep finding more voters!

To see how we stack up against the top players, here’s how the top ten entries (that I know of) are doing:

So please don’t get complacent!  We’ve got a ways to go yet!  We need every vote!

Joyce, our I-Maniac fan club president, is currently moving the fan club mailing list to a more reliable program.  So if you get an email from her, be sure you opt in.  She’ll be sending out an announcement about this contest as folks opt in.  Some of the email addresses no longer work, so if you have contact with an I-Maniac that may not be aware of this contest, please lend a hand and let them know about it.

I attended a United Filmmakers Association mixer over a week ago and was able to get a free copy of the Reel Directory, which is the Northern California version of the Hollywood Creative Directory.  Basically, it’s a directory of services and everyone in the business from audio post facilities to production equipment to stunt equipment rentals to traffic and crowd control services…virtually everything you could possibly think of and would need to make a movie.  I’ve used it to start calling around to studios and getting rental rates for the video we’re shooting.  My director is prepping for another shoot right now, but we’ll be meeting again on Friday.  I’m happy to say that my financing came through, so this video is officially green lit!

I’m also starting to get quotes from artists and will be commissioning some custom artwork as part of my submission.  Exciting stuff!

The contest requires that if I use any third party’s name, I must have a signed release from them.  This weekend, I got emails from Paul Ben-Victor, Eddie Jones, and Mike McCafferty and I talked on the phone to Vincent Ventresca on Sunday.  All these wonderful guys are very willing to sign a release so that I can use their names when entering my submissions into the contest!  Vince is contacting Shannon for me and I’m still waiting to hear from her.  Do you realize how lucky we are to have such a supportive cast?  I can’t think of another cast that would do what these guys do.

There is still so much to do and it’s going to get crazy.  Please don’t mind me if you see me wearing a straight jacket in the near future! 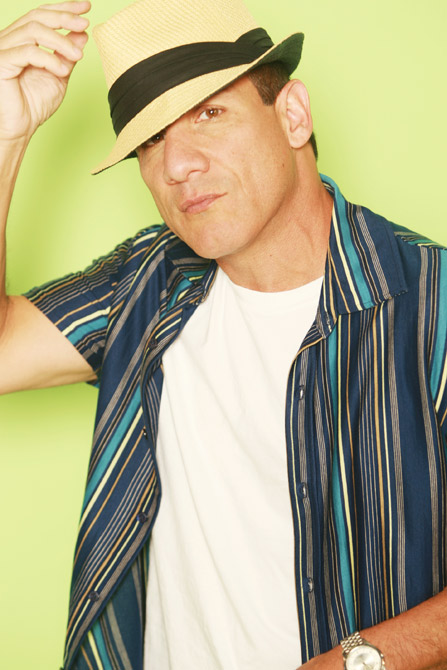 Here’s a great interview that Paul recently did for Media Blvd Magazine.  In it he gives a real nice shout out to The Invisible Man and its fans.

He, also, talks about his new movie Should’ve Been Romeo.  After years of development, it’s great to hear that Paul has secured financing for the movie, so it’s a go!  Awesome!

Times are hard for a lot of folks right now and, unfortunately, the I-Maniacs fan club board hasn’t escaped feeling some financial pressures as well.  So, I’m sorry to say that this year the fan club will not be hosting an I-ManiCon.

I always look forward to our annual gathering of cast and fans, so I do have to say I’m disappointed.  But this isn’t the first time that a year or two has been skipped, so if you were saving your spare change to attend, please keep saving.  The fan club board will, hopefully, be able to swing it financially next year.  I’m crossing my fingers!

Our Guest Cast Panel at I-ManiCon 2006

Well, it took a bit of doing and time, but I finally have the pictures up from this year’s I-ManiCon.  I want to give a big shout out of thanks to Laura, Joyce, and Tara who generously shared their pictures with me so that I could share them with you.  I also want to thank all the fans in the pictures who gave me permission to post their picture.

Following are a couple of photos of Mike and Paul.  The rest of the photos can be viewed from the I-ManiCon 2007 Photo Gallery page. 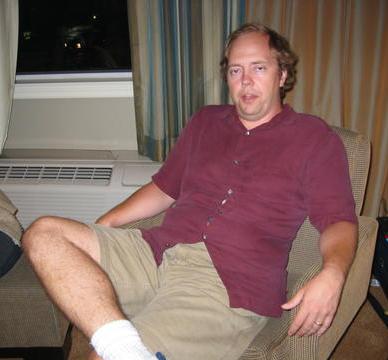 An exhausted Mike McCafferty takes the time to visit with fans. 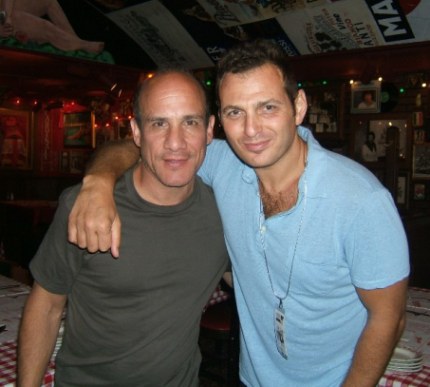 In addition to pictures, a few con reports have come in from fellow attendees.  Links to the reports can be found on the I-Maniacs Fan Club’s I-ManiCon 2007 page.

Planning for Next Year’s Con

Next year’s con will be held on July 19, 2008 in Los Angeles, California.  If you’re thinking of attending, here are some things you can do now:

So it’s been two days since I’ve been back home and I’m just starting to get myself back into a rhythm again.  The pace I’ve been going lately has been fun but exhausting.  Not only is it nice to slow down a bit and recover my energy, but I’ve pretty much been forced to do so since I brought home a rather unexpected souvenir from my trip — a sprained foot.

I gotta tell you, driving from LA to the Bay Area with a sprained foot is not my idea of a fun time.  But I’m grateful that it was my left foot, otherwise, I don’t know how I would have been able to drive home.  The foot is healing nicely and, while still very swollen, I can actually walk around now without too much of a limp.

Okay, enough about my foot.  Let’s talk about the con.  So you’re probably wondering which cast members appeared this year.  Well, the answer is none.

This is the first I-ManiCon ever where this has happened.  We all know that there are no guarantees.  Things happen and this year they happened to everybody at the same time.  Vince had a family reunion, Mike was out of town for a wedding, Eddie was in rehearsals for a play, Paul was doing who knows what, and I don’t have a clue about Shannon.

It pays to be flexible when going to an I-ManiCon.  It also pays to stay in town a few extra days.  Mike flew into town Sunday evening and stopped by the hotel where we were staying for a short visit.  He was an absolute sweetheart to do so because he was exhausted from his trip and he still had an hour’s drive home that night.  By the way, Mike and Sarah are having another boy and he’s due in November.

Paul was able to meet us at a restaurant in Santa Monica on Monday night.  He brought a couple of friends with him and we had a great time.

The con itself was a fun reunion of old friends and a meeting of new ones.  We did the typical con activities such as play games, watch I-Man videos, go out to eat…and this year we also had a poetry/song reading.

I’m afraid I failed miserably in the picture-taking department.  I was all set to take pictures of the cast at the con, but they didn’t show up and I forgot to take my camera with me when we met with Mike and Paul.  So once again I am dependent on others for pictures, which I hope to have in a week or two to show you.

Overall, it was a great time.  Staying in LA a couple of extra days gave us time to do some sightseeing and gave us the flexibility to meet with Mike and Paul.

I’m looking forward to next year and hoping that all the cast can attend and more fans can join us in the fun!

T-Shirts for this year’s I-ManiCon are now ready to order!  This year, the very talented Rain, a fan from Australia, graciously volunteered her services and created this absolutely adorable graphic.

Now is that cute or what?  If you wish to see a larger and more detailed view of the picture, I’ve placed a copy in the Fan Art Gallery.  Just click the button at the bottom of the picture to expand it to full size.

Happily, you don’t have to attend the con to get your own t-shirt.  T-shirts; as well as other merchandise like mugs, mouse pads, pins, and more; are now available for order online.  Laura, an Oklahoma fan, has made ordering easy by setting up a store at Zazzle.com.  However, the easiest way to find the store is to go directly to Laura’s website and click on the moving Zazzle picture.

Now go check out the assortment of cool merchandise!

The I-Maniacs Fan Club has some really cool items for bid on eBay right now.  Included are a couple of authentic clothing items that were given to crew members of The Invisible Man TV show.  The auctions end June 3, 2007, so get your bids in if these items interest you!

View and Bid on I-Man Collectables on eBay

If you’re itching to come to the I-ManiCon this summer, you’ll be interested in knowing that the official website is now up.  I can’t take credit for doing it this year as I had to bow out due to time constraints.  This film project keeps me busy!  But, thanks go to Deb, the I-Maniacs Fan Club webmaster, for taking over the job.

This year you can find the con website at the I-Maniacs Fan Club website.  The direct link is http://imaniacs.org/cons_events/imanicon2007/index.htm.

Last year, Vincent Ventresca, Paul Ben-Victor, Eddie Jones, and Mike McCafferty were able to attend.  It was such a treat to have them there!  This year, Joyce, the fan club president, tells us that all four guys are available to come again.  Of course, that could change if they have to work, but I’m hoping that all four will be able to make it again this year.  No word on whether Shannon Kenny can come yet, but I’m hopeful.  It would be so cool to have the entire cast at the con this year.

The registration form is up at the site and the cost of attendance is $40 for the one-day con.  Just print out and fill in the form and send it in with your money.  The admission price does not include meals.  Those are optional.  But I highly recommend that you attend the dinner also because you’ll get to dine with the cast.  We always take them out to dinner as a token of our appreciation for taking time out of their busy schedules to visit with us.

If you’re sitting on the fence wondering if you should go or not, I can assure you that you’ll find the experience worth your while.  It’s a great bunch of fans getting together with a great cast.

Time is running out.  There are less than nine weeks to the con, which will take place on July 21, 2007.  So get your registration in ASAP!

Hope to see you there!