On the Downloads page is a section called Banners.  Credit for the banner and idea goes to Rain, who suggested that banners would be a good way to publicize the film project.  If you wish, feel free to copy and paste (no hot linking please) the striking banner she created and place it on your own web page or use it in your sig line.

A fan art gallery has been created on the Fun Stuff page.  Rain has contributed three original drawings and I’ve moved over two original drawings by Shoshi from the Invisible Man Online site.  Check out the talent of these two fans!

If you have a banner or artwork that you would like to contribute, feel free to contact me.  I can only accept original artwork and graphics with non-copyrighted pictures.

This is cutting it very close for those of you who are on the east coast, but I just got home from work so I’m just now able to post this.  I got emails today from both Mike McCafferty and Jason Makiaris.  Though they didn’t specify, I’m going to make the assumption that they want me to pass this on to all of you.  In the interest of saving time, which is very short, I’m just going to copy and paste each of their emails below.

Hope you can watch and vote!

A double dose of me tonight, 10pm on VH1’s Department of Acceptable Media show.  DAM is an offshoot of Channel 101 where short films compete to return the following week.

First I am in a skit where I play…well, I play a rapist (start jokes..now).  It’s actually a funny show called Circue du Soliel: SVU so it’s not as bad as it sounds.

Second, I co-wrote a show called “l33t Haxxors” that won their weekly online contest and will be screened on the show tonight.  It’s about 2 Elite Hackers who get in serious trouble.  Evidentially, VH1 liked it so much that they asked us to shoot a second episode, which will be in competition on www.acceptable.tv.  So after the show, log on to the website and vote for “l33t Haxxors 2”!

Just a quick note to let you all know that a show that Mike McCafferty, Ben Pluimer and I have put together is airing tonight on VH1.  Acceptable TV is on at 10pm Eastern and Pacific (check your local listings to be sure).

Many of you know that I’ve been involved with something called Channel 101 for years now. With the help of executive producer Jack Black and
Channel 101 co-creators Dan Harmon/Rob Schrab, 101 has now branched off into a TV show called Acceptable TV which premiered last week. The same principles apply. If you like one of the mini-shows, vote for it and it returns the next week.

Our show tonight is called “L33t Haxxors”. Ben Pluimer wrote it with Mike, I shot it and wrote the music. We’ve already shot episode two
(which Mike and I appear in), and we could use your help next week to get it back in the show. I’ll send another e-mail next week letting you
know how you can vote to keep us in.

You can see more about Acceptable TV and our show at http://www.acceptable.tv/

You can see our other videos on our YouTube page at http://www.youtube.com/shipoffoolsprod

Hope everyone is doing great!

Time to put on your thinking caps, get your creative juices flowing, and break out the pen and paper because this year’s I-ManiCon features an I-Man poetry contest.

Following are the rules of the contest so, if you’re interested in entering the competition, please read them carefully.  Questions should be sent to I_Man_Poetry@yahoo.com.

I imagine that eventually these rules will be up on an official I-ManiCon website, but for now I’m helping to get the word out about the contest so that contestants have time to create their masterpieces…err, entries.

Have fun with it!

I was going to wait until I had a bit more information about this project, then I thought, why wait?  We all are interested in knowing about Vincent Ventresca’s projects, so I’ll give you what little I do know about this film.

The title of the film is Sorry, though that may just be the working title.  It appears to be a small independent film, possibly even a short film created specifically for a film festival.  If that’s true, I’m not sure what our chances are of getting to see it.  A lot depends on what the filmmaker’s goals are for the film.  Filming is supposed to start in a few weeks.

I’ll keep my ears open and if I find out more, I’ll let you know. So did any of you notice that Nestor Carbonell was in tonight’s episode of Lost again?  It was a very brief appearance, but for the second time he played the role of Richard Alpert.  So maybe this is turning into a recurring role for Nestor?

More articles have been written about Paul Ben-Victor’s play The Good Steno, which he co-wrote with his mother, Leah Kornfeld Friedman. 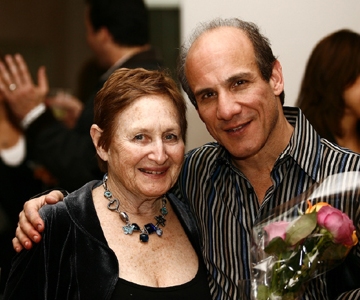 Bloomberg.com writes an entertaining and informative article about the play and in it we also get a tidbit of personal info about Paul.  Paul’s age is revealed to be 48.  It also says that he is the youngest of three children.

Reading farther down the article, I was happy that we finally get to hear an update about Paul’s screenplay Should’ve Been Romeo, which he collaborated on with his mother, “about a middle-aged actor forced to care for his live-in grandfather.”  According to the article, it “is currently making the rounds of producers’ offices.”  Let’s hope it gets optioned!

Heading over to the The Good Steno website, you’ll see that a blog has been added to the site.  Just click the link at the top of the page or scroll down a bit to see it.  Clicking on any article will take you to the actual blog site.  Do check out the pictures of Paul and his parents!

Exploring The Good Steno blog even more, you’ll see that Variety magazine wrote a very nice review about the play that is quoted in this blog post.

There are just three more weeks left to see Paul perform live on stage!  So if you don’t want to miss out, go to http://www.thegoodsteno.com/ to purchase tickets.

In Mike McCafferty’s latest commercial he shares the screen with a rather large co-star with a very long nose.  Perhaps you saw it air during the Oscars?  If not, then go to http://www.priceless.com/pricelesstv/ to view it.  It’s a darling little commercial. 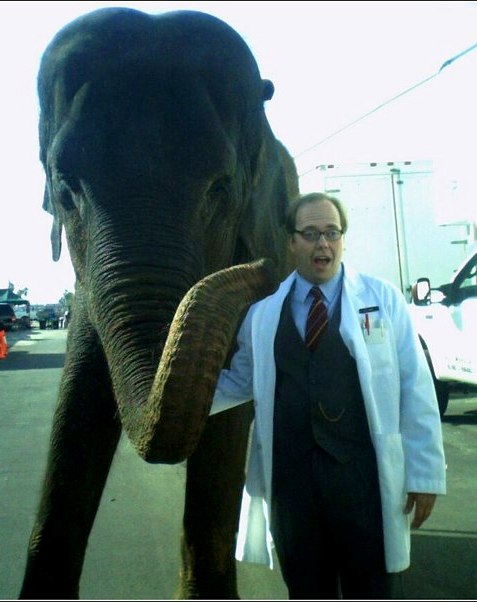