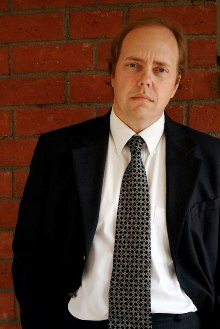 To get cast in a major motion picture is probably every struggling actor’s dream.  You get to rub elbows with the big guys, you get some screen time, and you get a nice paycheck too.  But what if nobody gets to see you?  What if you’re too far in the background?  What if you get cut?  That would suck, wouldn’t it?  Well, yes, and, unfortunately, this is what happened to Mike McCafferty.

Mike has parts in, not one, but two movies that were just released theatrically last Friday:  Charlie Wilson’s War and National Treasure:  Book of Secrets.  Here’s a little bit about them.

Charlie Wilson’s War stars Tom Hanks and Julia Roberts.  It is based on the true life story of Texas Congressman Charlie Wilson.  Mike’s role in this film was more of a glorified extra.  They wanted actors with improv experience to mix in with the extras at a party.  So if you squint real hard maybe you just might catch a glimpse of Mike at the outdoor party scene…or maybe not.

National Treasure:  Book of Secrets is the sequel to the blockbuster hit National Treasure.  It stars Nicolas Cage.  This was a bigger role for Mike…a speaking role with his face projected on a huge screen right behind Nicolas Cage.  That would have been cool to see.  But, as fate would have it, he was edited right out of the film.  Perhaps you might catch a glimpse of him in the audience?

I wish this news was better, but that’s the way things go sometimes in Hollywood.  There are no guarantees.

Better luck next time, Mike.  I’m rooting for you!