Last Saturday I was back in San Francisco for a one-day workshop.  This workshop was taught by veteran venture capitalist (VC) Frank Green, Ph.D, and sponsored by the Institute for International Film Financing (IIFF).  IIFF is the same organization that put on the workshop that I attended last month featuring IFP founder Sandra Schulberg.  It’s a forward-thinking organization that offers good opportunities for education, networking, and financing for filmmakers.  I’ve been attending so many of their meetings lately that I decided to go ahead and become a member.

After getting a producer’s take on film financing last month, it was nice to get a venture capitalist’s viewpoint this time.  The workshop was called the One-Day MBA Leadership Workshop for Film Entrepreneurs.  A great deal of the day was spent on leadership skills where we learned the VRE Leadership Execution Strategy.  I’m not going to go into detail about this but, basically, we learned how a leader must have a vision (V) for their project, cultivate relationships (R) to be able to work as a team, and be able to execute (E) a plan to get the desired results.  One of the things that really impressed me was his emphasis on working with people of different personality types and temperments.  This is not the kind of information I was expecting in this workshop but, as you will read later, it makes perfect sense why this would be important to a VC.

Interestingly, he didn’t cover subjects such as what a VC looks for in a business plan or how to find VC money.  I guess he figures that you should know how to get that information.  However, he did offer a couple of valuable tips:

Later that afternoon, the entire class split up into teams of four.  There were five teams total.  Our assignment was to develop a project strategy for one of several films:  a big-budget action packed thriller, a medium-sized-budget documentary, or a small-budget comedy.  We then had to give a 10-minute presentation in front of the class with each team member giving part of the presentation.  The other teams acted as judges and venture investors and had to decide how much of a $100 bill (for each project) they wanted to invest.  My team chose to do a small-budget comedy.  Everyone else chose documentaries.

I’m a bit biased, but I think my team totally rocked.  We had a producer, an entertainment attorney, a venture capitalist, and myself on my team.  I came up with a fun storyline that we tweaked.  By the time we had all the pieces put together, we had what would actually be a great little project if it were real.  Oh, by the way, we won the contest.

Thursday, I got a call from the chairman of IIFF who also runs a sister organization called Film Angels.  They are just what their name implies…a group of world-class Silicon Valley VCs who invest in films.  He congratulated me on my team’s win and, even though he knows my project is still in the early stages, he invited me to pitch at one of their meetings when the project is ready.  I’m encouraged that he thinks enough of my project, even at this early stage, to extend the invitation.  Major Hollywood players pitch to this group, so I better have a strong project to present to them if I hope to compete.  It’s not a guarantee of funding, of course, but it is a wonderful opportunity.

So who else got their DVDs already?  I received mine today.  Boy, was that a nice surprise.  I didn’t expect it so soon.  The first thing I did when I got home was to play the extras.  The comments by Matt Greenberg, Breck Eisner, and Vincent Ventresca during the Pilot were very entertaining.  I even learned a few things about the show that I didn’t know before.

The sit-down with Matt Greenberg was very touching.  I loved his acknowledgement and thanks to fans:

One thing I’d like to say to the fans, which is:  I thank you guys from the bottom of my heart.  You guys have been the lifeblood of this show.

My only complaint is that I wish that there had been more bonus features.  But considering how long we’ve waited for these DVDs, that’s a minor matter.  I’m just grateful we finally have them! 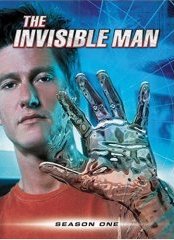 If you’ve been holding off ordering the season one Invisible Man DVDs because they are a bit pricey, now is a great time to order them.  Amazon.com now has them on sale for $29.99.  That’s a 50% savings!

I got my notice from Amazon.com today that my DVDs have already shipped and the cool thing is that they are charging me the sale price.  At this price, I think I’ll pick up a few more copies.  They would be great to give to potential investors and business partners who may be unfamiliar with the show and cast.

The first season of The Invisible Man is now available to watch online!  NBC/Universal and Fox have joined forces to create an online video on demand service that offers full-length episodes of their current and past TV shows as well as a limited selection of movies, clips and other content.  The site, called Hulu, which has been in beta mode for months, made its public launch today. And I’m happy to say that The Invisible Man is among the TV shows that are available for streaming!

All of the first season episodes of I-Man are up and I’m hoping that we get season two at some point, but that will most likely depend on how popular the show becomes.  Hulu has a nifty feature that lists shows and episodes in order of popularity, so the more people that watch, the higher the show goes in the popularity rankings.  Viewers can also rate the episodes and leave reviews.

Watch The Invisible Man on Hulu

In addition to Hulu, all the first season episodes of I-Man are available for viewing on AOL Video.

One of the really neat features of Hulu is that it allows the embedding of its videos onto other websites.  So, with that, I present The Invisible Man’s Pilot episode courtesy of Hulu.com.

I need you to drop by http://theitroom.com and vote my videos (Click “This is Good”)up and perhaps leave a “Pro-Mike” comment or two. This is not some vanity gesture toward me but a financial one. They pay me to make these little “gems” and if there’s a perception that I am liked in the world wild web then they’ll continue to see this as a symbiotic relationship, rather than parasitic and I’ll keep getting paid. If you choose, you can also watch the videos, which are getting better (or at least more structured).

So go on over to The IT Room and give Mike a hand, will ya?