Back when Mike McCafferty was attending college at Eastern Michigan University, he and three of his college buddies formed an a cappella group called the A.Y.U. Quartet (Atomic Young Ultrasonics).

Now, you have an opportunity to see Mike perform live with this group because, after 15 years, the A.Y.U. Quartet is having a reunion concert!  They’re going back to Ypsilanti, Michigan, for a one-night-only performance to be held at the Sponberg Theater on the Easter Michigan University campus.  The date is Saturday, September 22, 2007, at 7:00 p.m.  Tickets can be bought at the door or through EMU Online Ticketing.  Prices are $15 for general admission,  $12 for students, $9 for Mainstage Members, and $6 for kids ages 5-12. 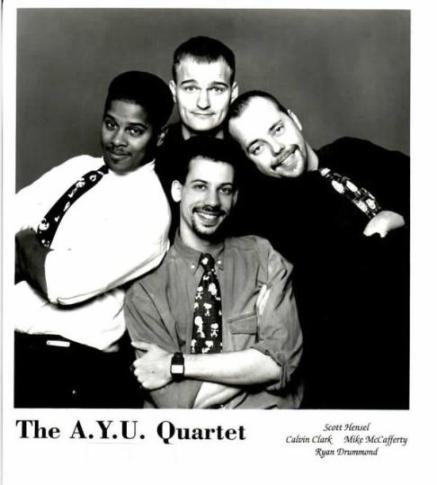 You can check out how talented these guys are by listening to a small selection of their songs on the A.Y.U Quartet MySpace Page and also on the CD Baby site (where you can buy their CDs).

Scroll down further on their MySpace page to watch a video of their various performances.  The same video is also available for viewing in two different sizes on the Michigan Travel website.  It’s lots of fun to watch and it includes some high praise from comedian/actor Soupy Sales.